You are here:Home » General » Ladies Day at Newport Bowling Club

On Sunday 28th June Newport Bowling Club held their annual Ladies Day event to which the men were invited to take part in a mixed doubles bowling competition.

The ladies played three games of seven ends, each with a different male bowling partner. The men’s scores were each added to their respective lady partner’s scores and the winning lady was the one who had accumulated the most points at the end of the three rounds.

Before the final round afternoon tea, prepared by Audrey Lloyd and her helpers, was served to the sixteen ladies who not only enjoyed being waited on by the men but were even more delighted to escape the washing up afterwards. A raffle took place at the end of the meal.

The final round of the competition was then played and the lady who had accumulated the most points overall was Ann Evans with a score of 26. Mary Gough was runner up with 24 points.

The winner’s cup was presented to Ann by Club Captain, David Doody, who had masterminded the competition.

President, Tony Lloyd, thanked everyone who had taken part in another very successful Ladies Day on such a warm and sunny afternoon 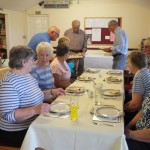